Sensing a need for a new church in the area, a group of believers banded together and spent time in prayer seeking the Lord's direction.  In 2004, this group met with the pastoral staff and leaders at Elmbrook Church in Milwaukee to discuss this new church startup.  While Eaglebrook would not become officially affiliated with Elmbrook Church, Elmbrook graciously offered their assistance and advice during these early planning stages.  As numerous names were being prayerfully considered for this new church, the following passage from Isaiah became central:

"Even youths shall faint and be weary, and young men shall fall exhausted; but they who wait for the Lord shall renew their strength, they shall mount up with wings like Eagles, they shall run and not be weary, they shall walk and not faint."  (Isaiah 40:30-31)

In 2005, without a building or a pastor, Eaglebrook Church began meeting in the local high school.  A variety of pastors and teachers from the surrounding area were invited to come to teach as the search for a pastor and/or a building began.  In 2008, Steve Rowe would become Eaglebrook’s first Senior Pastor. 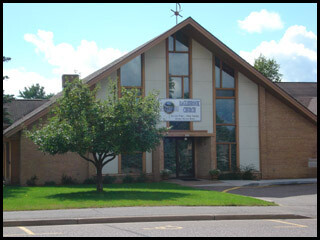 In September of 2013, Eaglebrook Church brought on its second staff member, Arnie Boedecker, who would serve as Ministry Assistant.  In November of 2015, Arnie completed the process of Ordination through Eaglebrook Church, and in December 2016, Arnie was called as Eaglebrook's first Associate Pastor.

In 2018, Eaglebrook Church began to go through a series of significant changes.  At this time, a number of the founding members of Eaglebrook Church decided to depart, as the church began to re-evaluate and clarify the kind of church we were striving to be.  This resulted in a new Mission Statement in 2019 and a revision to our Church By-Laws in 2022.

God has been with us for every step of this incredible journey, and we look forward to wherever God might lead us next!